For us, our Friday breakfasts aren’t just a chance to catch up. They are not an excuse to have that Friday fry-up (although, of course, they sort of are!). They aren’t even a good way to start the day with a positive spin.

No, the whole point of getting up early is business. And much as we like each other’s company, that’s why we’re all here. We track each member’s referrals: both those they give, and those they receive. We track both the opportunities, and how much money passes as a result of those opportunities.

Of course, the numbers aren’t 100% right. But in reality they are likely to be under-estimates rather than over the top. Unfortunately we’re not perfect, and a few of us forget to declare a few of the jobs that come good.

And so, what were the numbers last year? The 2019 scores are on the doors!

If you’d like to tap into our business network, why not come along and meet us?  Who knows?  You might be featuring in our leader-boards next year. 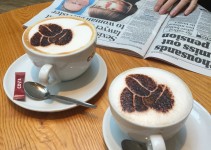 Join us for breakfast!

If you run your own business, and would like to discover the benefits of regular networking, drop us a line, and come along to one of our regular visitor days. They are usually the last Friday of the month.